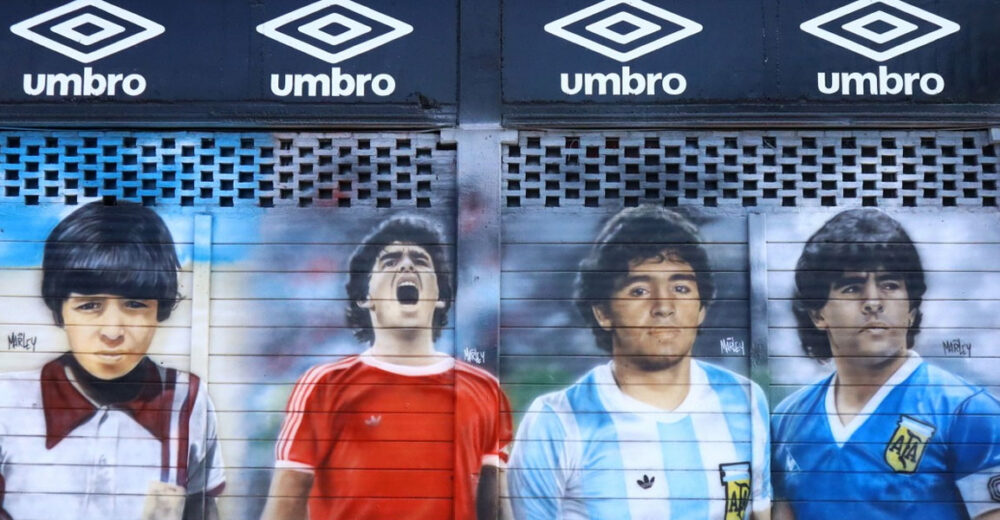 Murals of Diego Maradona, a tour of the most impressive murals that Buenos Aires has, in honor of the idol of Argentine soccer. 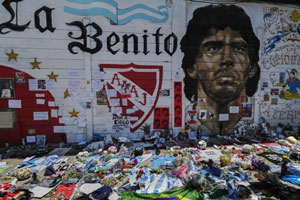 As we tell you in this note, Diego Armando Maradona is a very special figure for all Argentines and the world. For this reason, the walls were used to immortalize his figure.

Before important dates such as anniversaries of his birth or months after his death, the city (and the country) was intervened by different muralists who captured images of Diego in his best moments on every wall they could. An example of this love for Maradona is the field of Argentinos Juniors. This stadium has an image of Diego on all its walls. In turn, here resides the Sanctuary of Maradona, a space where the fans, before his death, paid tribute tirelessly.

Maradona was born on October 30, 1960 and died on November 25, 2020. These are the dates commemorations and tributes are paid to the Argentine idol. They are moments where it denotes the omnipresence of Diego in the heart and memory of all Argentines and the world. 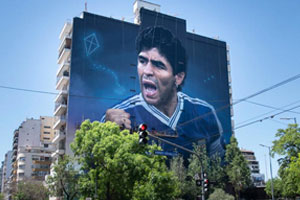 There are two very impressive murals in the city of Buenos Aires, which deserve a special mention. One of them is known as the largest Maradona mural in the world. It is a mural made by Martín Ron, a renowned urban artist, who captured Diego Maradona, on the party wall of a building, with a total size of 45×40 meters. This mural took 25 days to finish and you can see it in the neighborhood of Constitución, on Avenida San Juan. A total of 800 liters of paint were used, and the image is a reflection of Maradona in his role as leader, dressed in the blue Italy 90′ World Cup t-shirt. 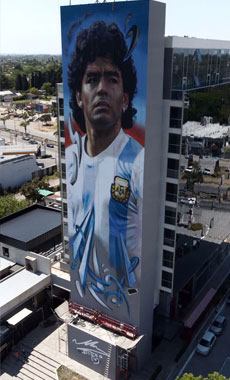 The other mural has a total of 40×12 meters and is located in Canning, Province of Buenos Aires. This mural was carried out by Maximiliano Bagnasco, a great muralist, who portrayed Diego with a hero’s expression, wearing the light blue and white shirt. Its location, in the back of a property, aims to be admired from the planes that take off or arrive at the Ezeiza International Airport. For this mural, 40 liters of paint and 300 aerosols were used. This same artist immortalized a 12-meter work in the city of Pompeii, Italy, 25 km from Naples, where Diego also played. In turn, he displayed a set of paintings by Diego after his death, in the Patio de los Lecheros, in Caballito.

In other Buenos Aires neighborhoods such as La Boca and Palermo, other provinces such as Santa Fe, Mendoza, Tucumán, Corrientes, murals of Maradona are erected. In addition, the idol is immortalized in the rest of the world such as Italy and Mexico.

Here we leave you a link to visit the most important places in Diego’s life.

To learn more about the murals of Buenos Aires, we leave you this note here!

We invite you to join our Graffiti Tour here to learn more about the Street Art of Buenos Aires!