Chalet 9 of July, the story of a little house built on top of a building, older than the Obelisk of Buenos Aires!

As you may have noticed, the city has many varied stories, here we bring you the story of a little house that, without a doubt, will catch your attention when you see it. 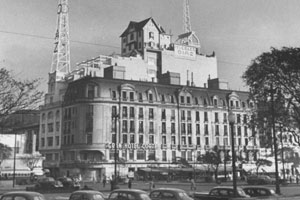 Located in the heart of Microcentro, looking towards the Obelisk of Buenos Aires, it is located on the 10th floor of a building, currently an office building.

It was built in 1927 on Sarmiento 1113 Street, a few steps from Av. 9 of July and long before the construction of the Obelisk. It is a Chalet with the style of the houses of Mar del Plata.

But, the history of this beautiful place that is out of tune with the architecture of Buenos Aires, is due to Rafael Díaz, an immigrant from Spain who came to our country in the 20th century with the dream of his house in heaven.

Owner of “Díaz Furniture Store” (Mueblería Díaz), a place with all kinds of furniture, turned into one of the most exclusive and important in the city, he decided to build a space to rest and eat something. Of course, Díaz lived in Banfield, a town far enough from the center of Buenos Aires to be able to come and go easily, so he decided to build a house on the roof of the same building just to have lunch, take a nap and have a previous rest to continue with the activities of his work day. 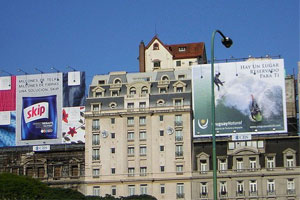 It has a fairly simple structure, with a mezzanine and two floors, inspired by the French Norman style very typical of the houses of Mar del Plata, his favorite place in Buenos Aires. From there, he was able to see how, in 1936, the Obelisk to which he has direct view was built. Also, we could say that he was the promoter of high-rise advertising, since he used his rest house to put up a poster advertising “Mueblería Díaz”, immortalizing his brand in thousands of photos from that time.

But, not only did he dedicate himself to furniture and the construction of houses in the sky, but he also took the opportunity to have his own Music Radio: LOK Radio Mueblería Díaz, which, later, became the current Radio Rivadavia. 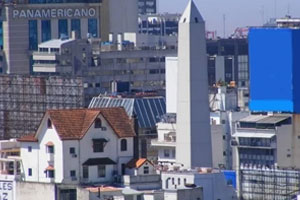 Upon his death in 1968, his heirs rented all the floors of the building, and even the immortal chalet functioned as a photographic studio and office dining room. In 2014, this house in heaven was declared a Cultural Heritage of the City of Buenos Aires, so it cannot undergo any modification without prior intervention by the Ministry of Culture.

Inside, the original ceramic floors are maintained and several of the chandeliers that hang from the ceiling remain intact since the beginning of the century.

Currently, it has been uninhabited for 40 years, with future projects and ideas to transform it into a cultural center, with a variety of spaces for different activities.

To visualize this beautiful Chalet, you just have to look up and there you will see the famous House in the Sky.

If you want to know more places to visit and enjoy a good story like Chalet 9 of July in the downtown area of ​​the city, we leave you the link here!

Also, we invite you to check our Free Tour City Center!