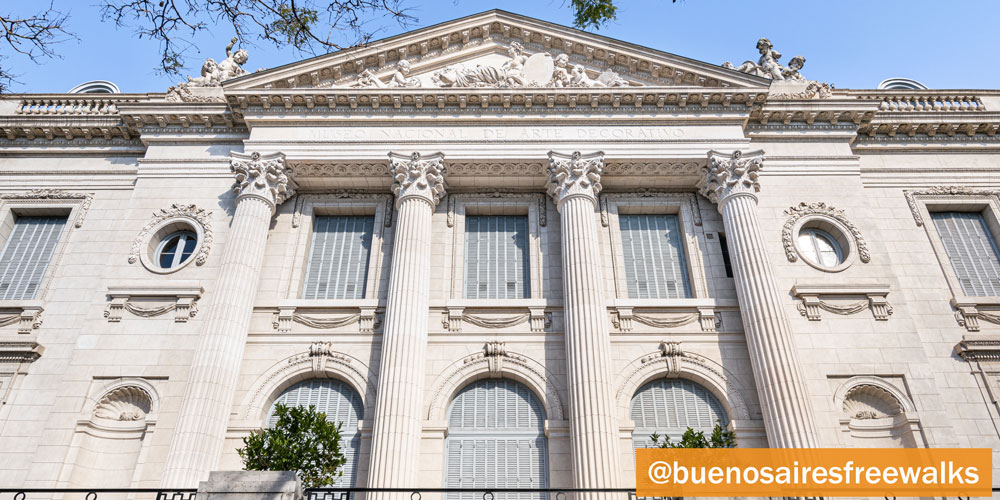 At the beginning of the SXX, Buenos Aires was one of the richest places in the world. At that time the city was undergoing great urban changes influenced by French fashion in urban planning and architecture. Many of the families of the Buenos Aires aristocracy decided to renew themselves, moving to the north of the city, in the Retiro, Recoleta and Palermo neighborhoods where they built their new houses. The result was a great collection of majestic palaces, whose architectural legacy continues to embellish the streets of Buenos Aires.

Here we leave you the best Palaces of Buenos Aires: 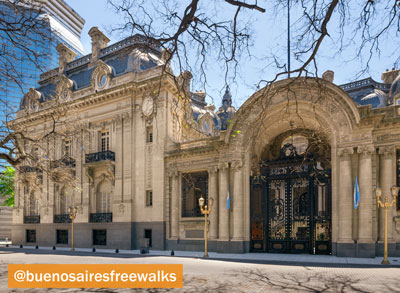 The San Martín Palace is, today, the headquarters of the Argentine Chancellery. It was originally the great house of the Anchorena family, built by the architect Alejandro Cristophersen for Mrs. María Mercedes Castellanos of Anchorena. It is characterized by a large pointed reception with two staircases of honor that lead to the raised upper floor or “piano nobile”. Its façade follows the guidelines of the Beaux Arts school in Paris. In 1936 it was bought by the Argentine Foreign Ministry and was named “Palacio San Martín” fulfilling the function of Headquarters of Argentine Diplomacy.

Given the situation of COVID-19, the guided tours are temporarily canceled, but we leave you their email address for more information: visitapsm@mrecic.gov.ar

In our Free Tour Recoleta you will find this beautiful Palace, touring this picturesque neighborhood of Buenos Aires! 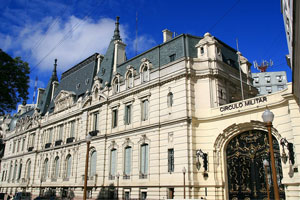 It is the largest Palace in Buenos Aires with 12 thousand square meters. It was the home of José Camilo Paz, founder of the newspaper La Prensa. Its façade reminds us of a fortified French Chateau, with high walls and elegant crowns. Its main door is one of the great jewels of Buenos Aires and, through it, we access the large round room that today remains intact and dazzles all its visitors. Today the Palace belongs to the Military Circle and can be visited by appointment. 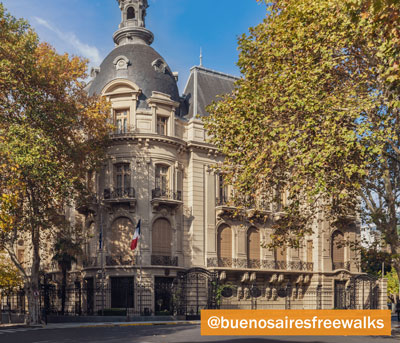 It is the most refined Palace in Buenos Aires. Its large dome with a lamp crowns the end of Avenida Alvear on the edge of Recoleta and Retiro. The house was built by the Ortiz Basualdo family and decorated by the most famous decoration house in history: the Manson Jansen in Paris. There the Prince of Wales Edward VIII stayed on his visit to Argentina. In 1939 it was bought by the French state to serve as an embassy. In the 70s it was sought to demolish it to build the Illia highway, but the French state opposed the expropriation and survived so that we can see it today.

Today it is the Embassy of Brazil. It was originally the home of Celedonio Pereda, who commissioned a palace with a facade inspired by the National Museum of France in Paris. Its ceilings were painted by the great Catalan painter José María Sert. In the 1930s, the President of Brazil Getulio Vargas stayed there, for which, in 1945 after Pereda’s death, it was bought by the Brazilian State to be an embassy. 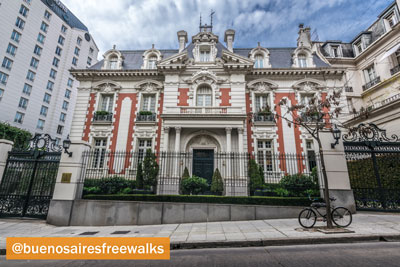 This elegant mansion was the house that Félix Saturnino de Álzaga and Elena Peña Unzué bought after getting married. Today it is the La Mansión Suite of the Four Seasons Hotel, one of the most luxurious places in Buenos Aires and where various celebrities such as Madonna and the Rolling Stones have stayed. It can be enjoyed by attending the hotel restaurant. 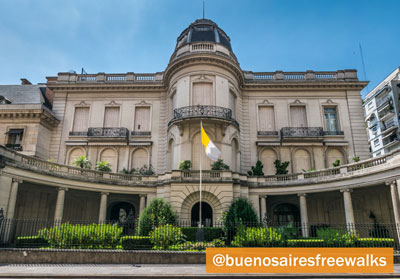 It is currently the Apostolic Nunciature, the Vatican Embassy. There, Adelia Harilaos de Olmos lived, one of the most outstanding women in the history of Buenos Aires who served as president of the Society of Charity with a great charitable and philanthropic work throughout the country. Very close to the church, she organized the Eucharistic Congress in 1934 and was named pontifical marchioness. When she died, she donated her house to the church and, today, it is the Nunciature, where Pope John Paul II stayed on his visit to Argentina.

This immense palace is part of our Free Tour Recoleta. 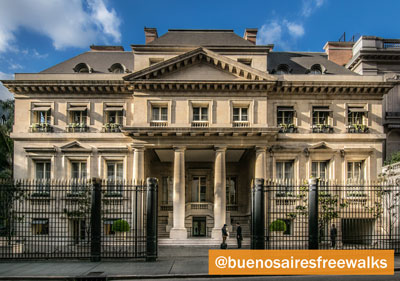 This beautiful and solemn mansion belonged to Luis Duhau, Minister of Agriculture. Today it operates as part of the Park Hyatt Hotel. The hotel consists of a historic building and a modern one on the other side down the ravine. Between both buildings is a beautiful terraced park where you can attend a luxury restaurant.

You will find this Palace in our Free Tour Recoleta! 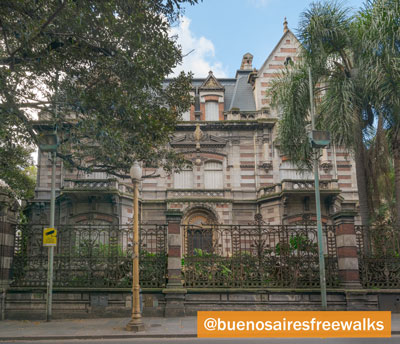 This beautiful mansion dazzles all who walk along Avenida Alvear. Its style is very contrasting, with the exposed brick and the large bars worked with the best iron craftsmanship, making it more British than other Buenos Aires palaces. It was the home of Alexander Hume, a Scottish railway entrepreneur and was later bought by the Duhau family. Today it is still a private residence.

You will find this mansion in our Free Tour Recoleta.

It is one of the largest and most dazzling palaces in the city, and it can also be easily visited. It was built by the French architect Rene Sergent for the Chilean diplomat Matías Errazuriz and his wife Josefina de Alvear. Since 1944 it has been the Museum of Decorative Art, which is why it is open to the public. There you will see different rooms with different decorative styles, from neo medieval, baroque and even Art Deco. It deserves a visit! 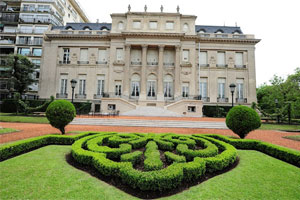 The Bosch family home is, today, the United States Embassy. It was bought at the initiative of Ambassador Robert Bliss from Ernesto Bosch, who was Chancellor of the Argentine government. Work of the architect Rene Sergent with Carlos Thays Gardens, it was the place where several presidents of the United States such as Roosevelt, Eisenhower, Bush and Obama stayed.

Buenos Aires has many more Palaces to discover. Some a little smaller or unknown, but here are some: Acevedo Palace (Saudi Arabian Embassy), Leloir Palace (Italian circle) and, outside the city, the Victoria Ocampo House.