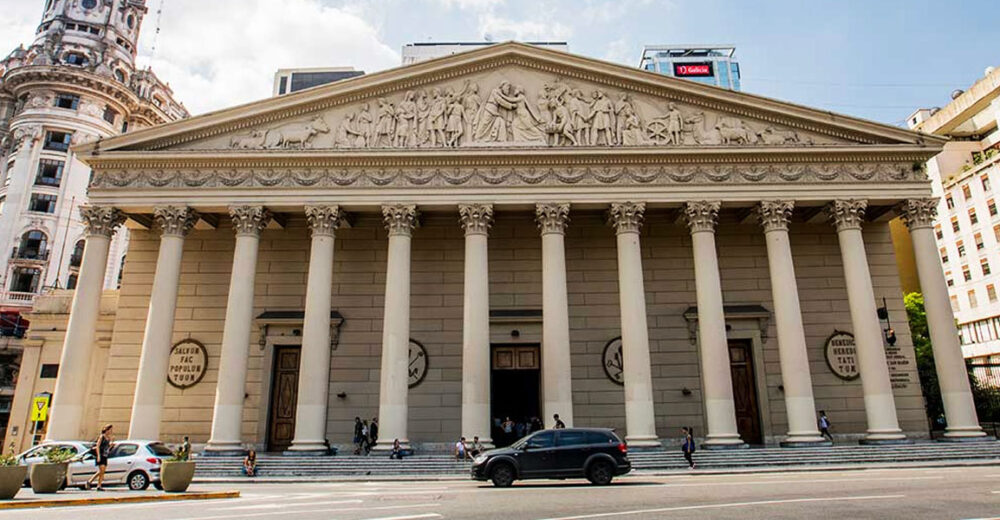 Metropolitan Cathedral of Buenos Aires, all the history about the main temple of the Argentine Catholic Church.

It is located in front of the May Square, at the intersection of Rivadavia Avenue and San Martín, in the neighborhood of San Nicolás, Downtown of the city. The history of its construction is extensive, but we are going to tell you the most outstanding details, since the current building that you will see is its sixth construction!

The reasons for so many renovations in its building are subject to fires, precarious materials, structural defects or floods. The first of its constructions dates from the year 1593, being a simple adobe chapel. Its final construction began in 1752, and was completed 100 years later, in 1852.

Its structure is neoclassical in style, with a profile similar to a Greek temple, moving away from the typical cathedral profile. The 12 columns it has represent the 12 apostles of Jesus. Inside, it has side chapels, naves and a transept under a 41-meter-high dome.

On the front of the Metropolitan Cathedral, you can see a beautiful ornamentation, which was made in 1860, by Joseph Dubourdieu, the French sculptor in charge of making the figure at the top of the Pyramid of May. The representation on the front is the meeting of James with his son Joseph in Egypt.

In turn, in 1877, the reform of a side nave was carried out in order to build the Mausoleum of General José of San Martín. 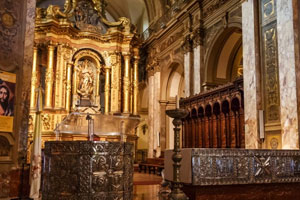 The main altar is imposed in the middle of the Cathedral, of enormous proportions and in gold, with wood carvings. Among the highlights to see in the Cathedral, we can mention its Dome with Renaissance frescoes, the Venetian mosaic floor that was made in England, the Mausoleum of San Martín, the Baroque-style main altar, the Chapel of Saint Martin of Tours and the German Pipe Organ.

Declared a National Historical Monument in 1942, it is considered one of the most important architectural works of the colonial era in Argentina.

You can visit the Cathedral from Monday to Friday from 8 a.m. to 7 p.m., Saturdays and Sundays from 9 a.m. to 7:30 p.m. In turn, the Cathedral has guided tours and audio guides in several languages.

To find out everything you can do in this central area of ​​the city, follow this link.

We invite you to join here our Free Tours around the city, to learn many more details and stories of Buenos Aires!