Liberty Temple Buenos Aires, all the history about the first synagogue of the City of Buenos Aires.

Its official name is “Liberty Temple – Israelite Congregation of the Argentine Republic”. Declared as a National Historical Monument in the year 2000. 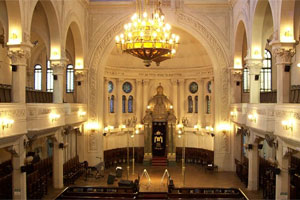 In 1862, the bases of the Jewish Community in our country were created. For many years, this community met in a family home to celebrate religious services, until the Government of Domingo Sarmiento, in 1871, authorized the exercise of the Jewish Rabbinate in Argentina. In 1891, the first Jewish School and the Latin Israelite Congregation of Buenos Aires were born.

It was not until 1889 that the necessary funds were raised to erect the Temple that said community deserved. The land on Libertad Street was bought to build the Synagogue. In 1897, in front of the current Lavalle Square, at that time the Miró Palace, they placed the foundation stone of the first Synagogue of Buenos Aires. Given the increase in followers, in 1932 repairs were made until it acquired the appearance of today. 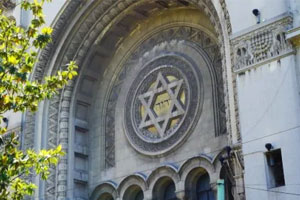 Its style is eclectic, with influences from the neo-romantic architecture of the beginning of the 20th century, in addition to having some characteristics of Byzantine architecture, such as the German Synagogues of the 19th century.

In the front, it has a succession of semicircular arches, which are decorated by two guards and surrounded by sculptural moldings that form an enormous flare that is supported by lateral pilasters. In the center of these arches, is the Star of David.

It has a total capacity that receives 700 parishioners and its most precious treasure is the Walcker symphonic organ that it has inside. Manufactured especially for this Synagogue in 1931, by the German firm E.F. Walcker & Cie, in Ludwigsburg, is a living treasure, since it is one of the 3 surviving organs in the world, after the stage of nazi terror. You may wonder if it is still working, and the answer is yes, given that a restoration was carried out in 2017 and new tubes were purchased from Germany. Weekly, concerts are held where this beautiful instrument is used, in collaboration with the Colon Theater. 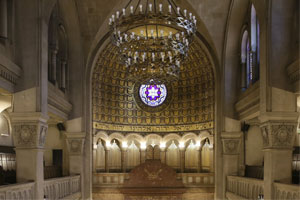 In 1967, the inauguration of the Jewish Museum of Buenos Aires took place. A space that exhibits samples of consecrated artists, both national and international. In addition, it has a permanent sample of the history of the institution, safeguarding the memory of the Jewish people in Argentina. It is located exactly next to the Liberty Temple and its uniqueness is that of being a living story of the history of immigrants in our country, of the ancient tradition and of the Jewish colonies. Here is their website for more information.

We leave you, also, the website of the Liberty Temple here.

To learn more about the Liberty Temple, we invite you to join our Free Tour here!