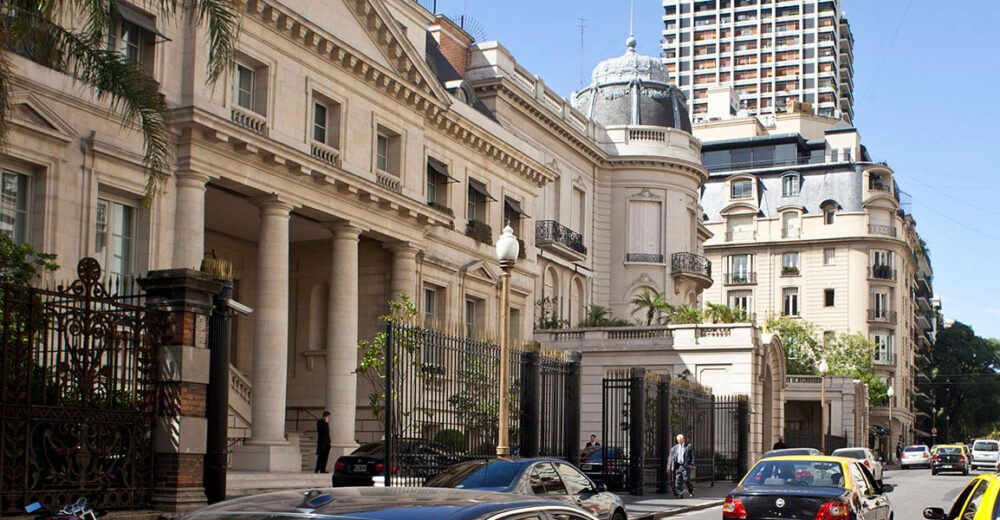 Alvear Avenue Buenos Aires, all the details and history about one of the most aristocratic and elegant streets in the city. 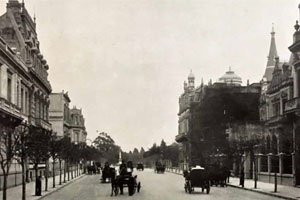 It begins its journey in front of the outstanding Torcuato de Alvear Monument, inaugurated in 1900, and ends at the Carlos Pellegrini Little Square. To learn more about the monuments of the city, we leave you this note here!

Several residences of the aristocracy, parade on this beautiful avenue. Among them, we can name the Pereda Palace (current residence of the Brazilian Ambassador, since this country acquired the property), the Ortíz Basualdo Palace (current French Embassy), the Concepción Unzué de Casares Mansion (headquarters of the renowned Jockey Club) , Álzaga Unzué Palace (current Four Seasons Hotel) and the Duhau residence (today the Park Hyatt Hotel). All these buildings denote the influence of the French style, so you will notice that it is one of the avenues with the greatest Parisian air. Yes, this area will make you feel in Paris!

At the corner of Ayacucho Street and Alvear Avenue, you will see a sophisticated building, majestic for its decoration and architecture. That same, is the famous Alvear Palace Hotel; a perfect combination between the most modern technology and the elegance of Europe. In 2003 it was declared a Historical Monument of Buenos Aires, and in its 85 years of history, it has been the lodging of kings, presidents, world-renowned artists and emperors. In addition, it is the faithful representation of the Belle Époque that our country experienced. 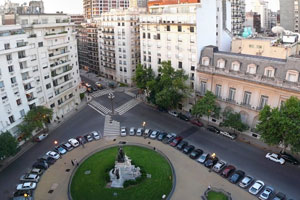 The length of the avenue, passes through the neighborhoods of Retiro and Recoleta, and is approximately seven blocks. Currently, much of its appeal has been damaged by different situations, so many stores of large international brands are no longer there. Likewise, strolling through its streets has not lost its magic.

To begin the tour, we can start from the Monument to Alvear, which represents Freedom, Strength, Eloquence and Victory. Then, we continue to the Alvear Palace Hotel. Following the path, we will see the Lloubet Residence, which, some time ago, functioned as a Polo Ralph Lauren store, currently empty. Here, you can see the ornaments that adorn its stained glass windows in bas-relief. Site that responds to the Art Nouveau style and was owned by the Lloubet Family. Our next destination will be the Alvear Gallery, which is one of the only ones that continues to operate on this avenue. It has two entrances that begin and end on Avenida Alvear itself. At the corner of Av. Alvear and Rodríguez Peña, you will find the Casares Palace, owned by Adelia Harilaos de Olmos, the same owner of the Anchorena Palace (a few meters from here). Currently, and since 1960, it functions as the Secretary of Culture and Communication of the Nation. Right in front of the Casares Palace is the Maguire Residence, one of the most representative jewels of the golden age of Buenos Aires. It is a mansion that has survived the 1930s, where most were demolished. This residence is still in the hands of its former owners, although they do not live there. A few meters away, you will find the Duhau Palace, whose owners were the Duhau Family. With notorious French influence, it has a neoclassical architecture and it is the Park Hyatt Hotel today. Highlighted by its enormous dome on the façade, with access to its gardens on the other side of the block, on Posadas street, you will see the Fernández Anchorena Palace. Also of French lines, it was built in 1907 for that family. Currently, it is the Headquarters of the Apostolic Nunciature. Then, you will meet the Jockey Club of Buenos Aires. 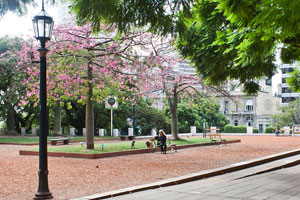 On the other hand, although they are not part of the Avenue itself, we recommend you go to the Álzaga Unzué Mansion, currently the Four Seasons Hotel, and the French Embassy, ​​located on Arroyo Street.

All the buildings and the style of Alvear Avenue denote the economic power of the upper classes that inhabited the city. In turn, you will see several spaces dedicated to prestigious works of art and many details that denote the good taste of the architects who carried out each construction.

Walking around here is really pleasant, so we recommend that you visit this beautiful Buenos Aires avenue. Here, you will be able to see everything you can do in the Recoleta neighborhood, and learn even more about this area!

We invite you to join our Free Tours of Buenos Aires here, to continue enjoying this great city.