Obelisk of Buenos Aires, all the details about the icon that represents this city in the eyes of the world.

It is the major emblem of Buenos Aires and its population, like the Statue of Liberty in New York or the Eiffel Tower in Paris. It stands on the same site where the National Flag was hoisted for the first time. 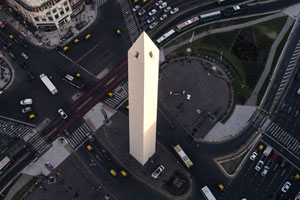 Work of Alberto Prebisch, renowned architect and exponent of national modernism. It was inaugurated in 1936 paying homage to the fourth centenary of the First Foundation of Buenos Aires.

It is an empty concrete construction, with a total height of 67.5 meters, a base of 6.8 meters on each side, weighs 70 tons and has a single entrance door that faces Corrientes Avenue. Behind this door, there is the marine staircase with 206 steps, 7 landings and whose route leads to the top of the Obelisk. There is the viewpoint with 4 windows, which you can see from below. The view from this viewpoint is a perfect panoramic view of the entire city. Admission is only on special occasions. 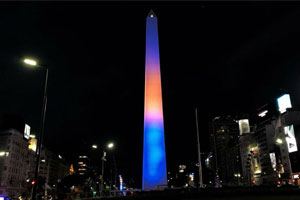 A center of attention, its location is clearly strategic: between the intersection of two of the most important avenues in the city: 9 of July Avenue (the widest in the world) and Corrientes Avenue (cultural center of Buenos Aires). It stands in the Republic Plaza, in the heart of downtown Buenos Aires. Here, formerly, the church of San Nicolás of Bari was located, which it was decided to demolish to build 9 of July Avenue.

The Obelisk is frequently used as a meeting point for demonstrations, as well as sports celebrations. Therefore, it is a fairly circulated area. At night you will see how lights are projected that can vary in the case of a special event, such as national commemorations.

Without a doubt, it is a monument that will attract your attention. Buenos Aires is known worldwide for this immense Obelisk that represents it!

To learn more about the city, we invite you to join our Free Tours of Buenos Aires here.

Here we tell you everything you can do in the area surrounding the Obelisk.