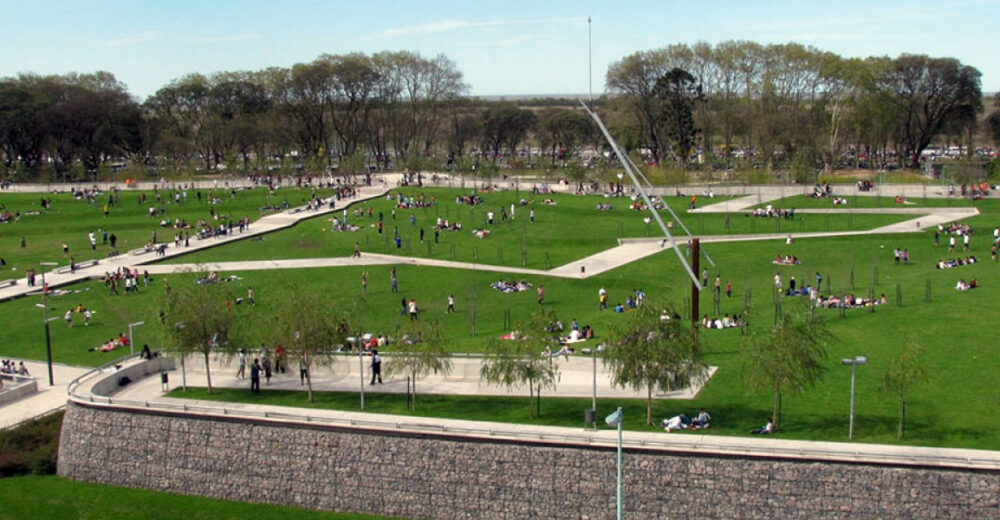 Created as a symbol to honor the most important Argentine women in the country, who are the same women who name the streets of this modern Buenos Aires neighborhood.

Located in the east of Dock 3 of Puerto Madero, it has more than 5 hectares of extension and the Old Puerto Madero Corporation was the one who took the prizes for its construction.

Its creation is taken as a landscape operation of the city of Buenos Aires, in the Buenos Aires sector with the most recent rehabilitation, since Puerto Madero is one of the most modern neighborhoods.

This park, due to its location and scale, is the one that ties up and links the river with the city, hand in hand with generating spaces such as containment areas and places for mass encounters.

Inaugurated in 2007, honoring great Argentine women. It has a wide central plaza, different levels that allow a panoramic view of the place, and a great variety of trees and plants that provide a beautiful landscape in the middle of the asphalt.

Among the diversity of flora that you will find here, you will be able to observe magnolias, tipas, araucarias and jacaranda. All of them are part of the group of typical and characteristic specimens of the country.

Its central square is designed as an amphitheater with green staggered edges, in addition to having 200 rose plants of various colors that, in spring, perfume and decorate the place in a special and unique way! Undoubtedly, it is the best time for you to visit this place and you can admire the flora in all its splendor. Surrounding this area, you will see a huge belt full of bushes and trees that give a kind of completion to the general landscape.

It is located between the most important and named streets of Puerto Madero, at the intersection of Av. Juana Manso, Av. De los Italianos and Marta Lynch.

Regarding its design, it is taken into account to unite the elements that predominate in the area: the nature of the river and the city’s fabric. In this case, the Argentine Women Park is in line with the Plaza de Mayo, posing a particular relief, with movement of the ground towards its edges, and the green, terraced amphitheater configures the level of the central space with its height of almost 3 meters, matching the spaces with the level of the sidewalk on its west side. Perimetrated by gabion walls, forming a curved irregular figure. Transversely, it is crossed by a path that ends at the access to the river.

Without a doubt, it is a beautiful green space so you can take a break after visiting the historic center of Buenos Aires. For more information, we invite you to join our Free Historical Center Tour!

In addition, here you can find out about everything you can do in Puerto Madero!