Man has always had the need to express himself artistically and visually. Going back 12,000 years, paintings inside caves depicted animals. Mammoths, deer-like creature in Europe, Guanacos in Argentina that hunter-gatherers stalked for food. Along with these images Cro-Magnon men and women used to take pigments of various colors and put them in their mouth. Then, place their hand against the wall and spit the pigment over the top leaving the silhouette (negative image) of the human hand painted on the wall. This is the world’s earliest stencil.

The last 5 years have been very important for the development of Graffiti in Buenos Aires. What began as an act of vandalism, nowadays is called Street Art. Every brushstroke express moods and stories.

In Argentina, Murals and Graffiti began in the earlies 1990s. Graffiti started as signatures of different graffiti groups and used to be rejected by the citizens.

Little by little that negative feeling turned to respect and admiration as the graffiti evolved.

Murals and Graffiti invaded different parts of the city. Nowadays it is possible to identify two birthplaces of street art in Buenos Aires:

Several years ago Palermo was classified as one of the primary spaces for the difussion of different arts. The different walls and curtains of local neighborhoods are the backstage of these works of art.

In 2014 the City Government sought to bring culture to the streets, so they organized a project that involved 12 national and international artists. The results were 6 wonderful murals.

JOIN THE GRAFFITI TOUR IN PALERMO! CLICK FOR MORE INFO!

Martín Ron is a local artist whom the NY-based publication Art Democracy called one of the top 10 muralists in the world. He painted Victoria Brown. The principal drive for Martín Ron is to “Bring the art to the people.”

First of all, Ron began painting in the province of Buenos Aires (3 de Febrero) in the end of the 90’s, as one of the first graffiti artists and muralists on the scene. Above all, Ron believes that his painting is a gift to society and when he finishes a piece it is no longer his own. Craving interaction with those around him, Ron always paints with music playing in the background. He never uses headphones for fear of being isolated from his surroundings. As a result his works in progress resemble something of a paint jam. Certainly, neighbors often come out to converse and share their praise for his elaborate works.

Finaly, on the corner of Cabrera and Humboldt the following mural arises from the buildings. Artists: Grolou y Dame. Adrián Escandar 162 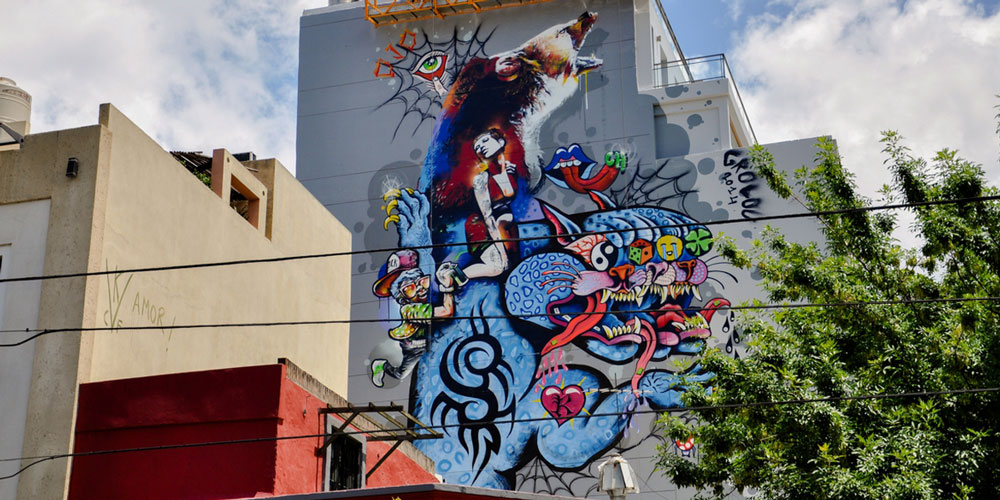