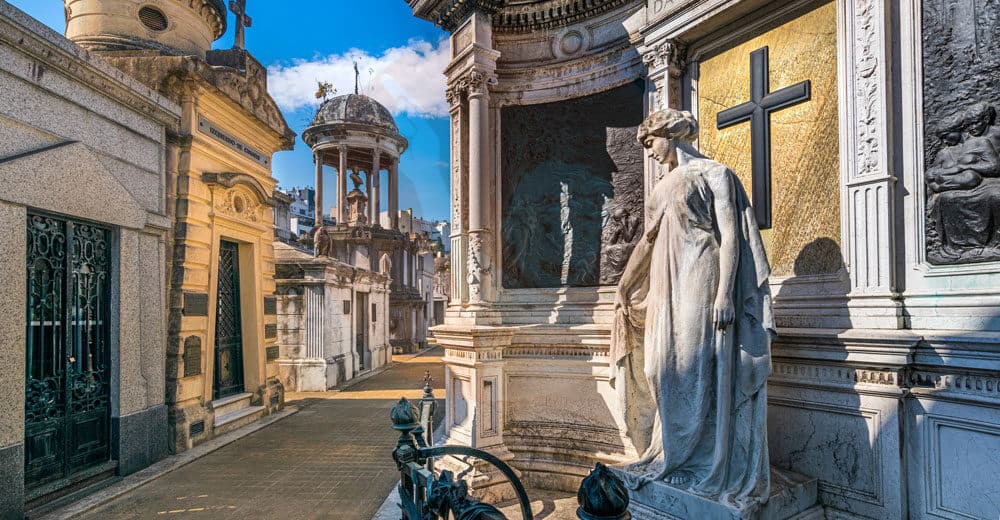 In this new post we present Curiosities of Recoleta Cemetery. Check this list about the most popular place in Argentina:

It’s been designed as a city

In 1822, its 5.5 hectares (14 acres) of land were expropriated from the Recollect monks who had used it as an orchard. This necropolis is structured in blocks with avenues and streets. It was designed by the French civil engineer Próspero Catelin, who also designed the facade of the Buenos Aires Metropolitan Cathedral. In 1881,under President Alvear, the cemetery was remodeled. This was when the surrounding walls were erected and the big entrance with Doric columns was added.

It opened as a public Cemetery

Although nowadays the cemetery is private and one of the most expensive blocks in Buenos Aires, it opened as a public cemetery. In fact, the first people buried here, were an emancipated slave called Juan Benito and an Uruguayan woman, Dolores Maciel.

It shows around 6400 statues, sarcophagi, coffins and crypts made with marble of different artistic styles: Art Nouveau, Art Deco, Baroque and Neo-Gothic. There are also masonic symbols and religious iconography. Between 1880 and 1930 the tombs were built with materials made from Milan and Paris.

Over 90 tombs are National Historic Monuments

Many important personalities have been buried here. The most famous one is Evita Perón (nee Duarte), but many presidents are buried here: Pellegrini, Roca, Illía… Artists like Candido López and Armando Bó, and Nobel Prize Luis Federico Leloir. 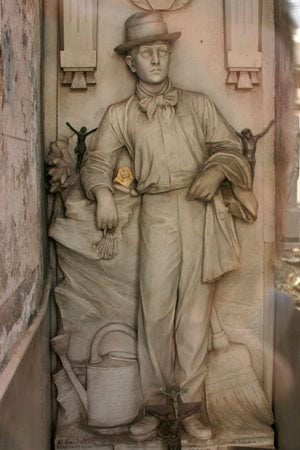 David Alleno worked at the cemetery and saved each penny to buy a grave there. He hired an architect to design his tomb and a Genoese sculptor who made a low-relief of him in his working clothes. Once the tomb was ready, only the corpse was missing, so 35-year-old David drank poison and died.

Caretakes today say you can sometimes hear noises coming out of the tomb, as if Alleno were not fully satisfied with his resting place.

You can learn more stories like this in our Recoleta Cemetery Tour.