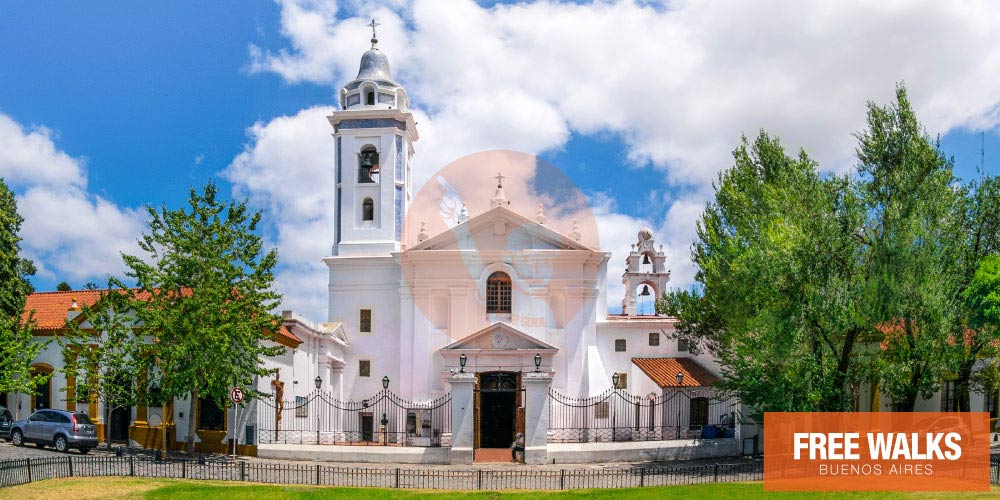 As you know, Buenos Aires was part of the Spanish empire, more precisely, capital of the Viceroyalty of the Río de la Plata. For this reason, the majority religion in the country is Catholicism.

Although in colonial times Buenos Aires did not have many resources and never built temples as grand as Peru or Mexico, some very beautiful colonial churches have remained, added to a great repertoire of temples built in the great golden age of the city during late 19th and early 20th century.

Thus, we can find a variety of styles between Neo-Gothic, Neo-Romanesque, Neo-Renaissance and various modern styles.

Here is a list of the most outstanding churches in Buenos Aires for their beauty. 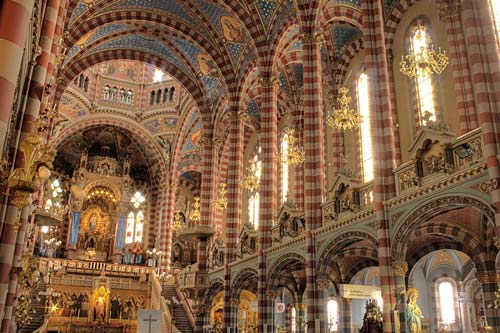 Inaugurated in 1910 this church is the work of the Salesian community.

It is located next to a school of the same order and Carlos Gardel and Ceferino Namuncurá sang in its choir.

While on the outside it does not attract too much attention, the interior is, without a doubt, the most dazzling of a Catholic church in Buenos Aires. It is characterized by the mixture of styles: it has classic arches that seem to refer to the Romanesque style or a Byzantine ornamentation, but the spirit of the structure is Gothic, in order to raise the walls and vaults towards the sky and provide large windows to the temple to be filled with light. This characteristic, added to the colors of the temple (reddish columns with blue ceilings with golden stars) make it a unique heritage of the city. 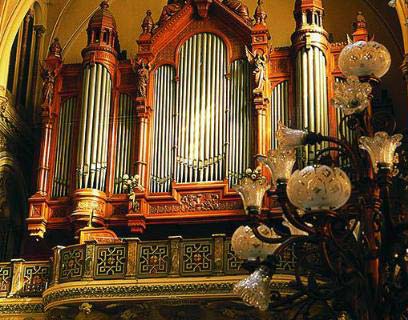 Located in the Retiro neighborhood, this church was built by María Mercedes Castellanos de Anchorena, an outstanding lady of the Buenos Aires aristocracy and named pontifical countess.

Completed in 1914, it has an eclectic style, with a mixture of Gothic, Romanesque, Byzantine and Renaissance. Mrs. Mercedas Castellanos is buried in her crypt, in an imposing Carrara Marble Vault.

What also makes this church unique is its organ: a masterpiece by the French builder Cavaillé-Coll (the same one who made the Notre Dame de Paris organ) with 5 thousand pipes, being today the best organ in the country.

This basilica is one of our attractions in the Free Tour of Recoleta. 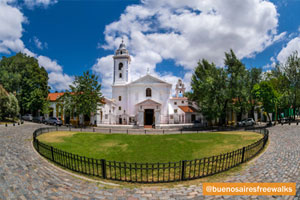 Due to the fact that during the colony there was not much money in the city, many of the colonial churches in the center were covered with rich ornamentation in the 19th century, losing their colonial character and many others were burned or destroyed during political conflicts.

The Iglesia del Pilar, which was originally a Franciscan convent outside the city, survived these changes, maintaining its colonial simplicity and its baroque wooden altars in impeccable condition.

It is undoubtedly a beautiful church that can be visited in conjunction with a visit to the Recoleta Cemetery and the Plaza Alvear fair (Plaza Francia).

This basilica is also part of our Free Tour of Recoleta, every day 10:30 am. 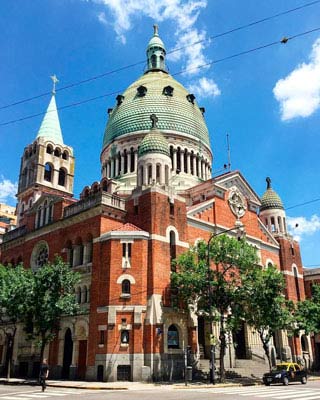 Walking along Av. Belgrano, a large green dome that dominates the landscape is surprising: it is the Basilica of Santa Rosa de Lima, a monumental work built by María Unzué de Alvear, papal countess, in 1934 and inaugurated with the celebration of the Eucharistic congress in Buenos Aires. Aires.

On the outside, it stands out its great dome and brick body, and, on the inside, a rather square space, with green marble columns and vaults with golden mosaics. 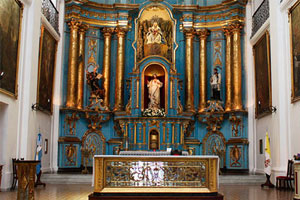 The only colonial church in downtown Buenos Aires that has kept its spirit is the Church of San Ignacio.

It is a baroque work that was built by Jesuit architects in 1822 as part of the Block of Enlightenment. Today it is the oldest building in Buenos Aires since, up to this date, all the buildings in Buenos Aires were made of adobe and have not survived, as the Jesuits had already begun to build brick works and San Ignacio was the church which ushered in enduring buildings in the city.

Although it was partially destroyed in 1955, its interior heritage could be recovered and today we see beautiful wooden altars with leaf gilding that transport us to Buenos Aires in the 1700s.

This church is one of the attractions on our Free Tour of Downtown Porteño. 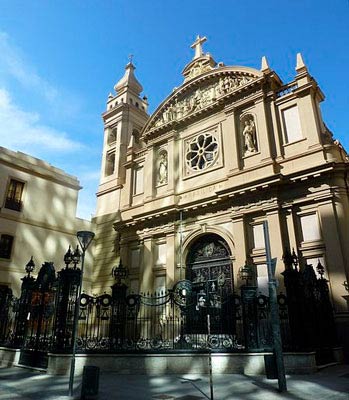 The Iglesia de la Merced dates from the colonial era, but has had several modifications. Today, it has an ornate neoclassical façade, with an extravagant tower that looks more like an Islamic minaret than a church tower.

On the frieze you can see an iconic image: Manuel Belgrano, creator of the national flag, handing over the baton of the army of the north to the Virgin of Mercy, whom he asked for victory in the battle of Tucumán, a decisive bastion of Argentine history.

Its location in the heart of downtown makes it a place of tranquility and respite. Next to it, you can also visit the old cloister of the San Ramón Nonato convent, today converted into a gastronomic place with a beautiful garden and colonial galleries.

Built by Jesuit architects in colonial times, too, it was lined in the 19th century by rich neo-baroque ornamentation, with Portuguese-style mosaics and Baroque Solomonic (corkscrew-shaped) columns.

Located a few meters from Plaza Dorrego, it can be visited in combination with a visit to the San Telmo neighborhood or the Fair. 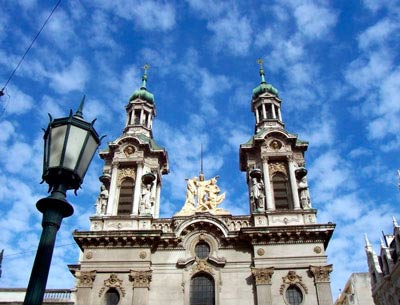 Just 100 meters from Plaza de Mayo, walking down Defensa street, the Austro-Germanic style domes of the Church of San Francisco stand out.

Its structure dating from colonial times was clad in the 20th century by the architect Sackman, who gave it a style reminiscent of the Bavarian churches and put on its facade iconic sculptures by the Austrian sculptor Antonio Voegele: these are 4 iconic Italians : Saint Francis of Assisi, Dante Alighieri, Christopher Columbus and the pinto Giotto.

The most important in Buenos Aires (Barrio de San Nicolás)

Although the Cathedral of Buenos Aires is not, in our opinion, one of the most beautiful churches, we could never ignore it on this list.

Its exterior facade in front of the Plaza de Mayo seems more that of a Roman temple than that of a Catholic church, drawing attention to its frieze from 1860 that represents the Patriarch Joseph with the Egyptian pyramids in the background.

Inside, you will find the most precious and beautiful of the temple: The tomb of General San Martín, hero and father of the country.

The Cathedral is one of the attractions in our Tour through the Center of Buenos Aires.