How to get Around Buenos Aires

Buenos Aires is a very large city, in addition to being the capital of the country. It has many activities to do and countless neighborhoods to visit.

Here, we want to tell you about the different options on how to get around in Buenos Aires. The different means of transport and what they need to know to be able to use them.

The first thing you need to do is buy the SUBE card.

You will need this magnetic card to pay for all BA public transportation. Without it, you will not be able to pay, so buying this card is vital to take the bus or the subway.

The card works with credits, so it is necessary to load it before traveling. You can have a negative balance, being able to charge it at another time.

The amount of negative balance that can be had, varies according to the increase suffered by the ticket amounts, so we recommend you not to rely so much on this as something in favor!

Where to buy the SUBE?

The SUBE card can be purchased almost anywhere: subway stations, kiosks, markets and post offices. If the store has this sign on the door then it is possible to buy a card or charge it. 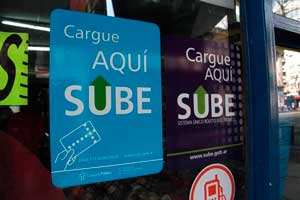 If the place has this sign sube-cardoutside, then you are sure to get the card and top it up.

It is easy to get the card, but to be safe, we recommend checking the different points of sale on the SUBE official site here.

Where it says “Province” you must choose Capital Federal (Not Buenos Aires).
Where it says “locality / neighborhood” they must put the district where they are located (Ex: Palermo).

Then, choose the point of sale closest to your location.

The SUBE card, is it personal?

Good news! No, it is not personal, so it can be used by more than one person. This means that more than one trip can be paid for with the same card. What’s more, before leaving the city they can give the card to another tourist to use or keep it for a friend or relative.

Do not forget to charge the credit of the card. We recommend loading it with enough money for your entire trip.

Now, with the card in your possession, it’s time to take a ride.

If you lose your card and only need to make one trip, you can ask a passenger to buy your ticket in exchange for cash. However, it is advisable to get a new card.

These signs mark the entrance to any subway station.

The Subway or Metro is the best way to get around BA. It’s more easy than taking a bus and is the fastest way to travel in the congested city center.

The Subway reaches any tourist spot in Buenos Aires, except La Boca.

The BA Subway network is small compared to the size of the city, but it is easy to understand. There are 6 different lines identified with letters and colors:

Lines A, B, D and E can be seen as branches of a tree, from the center of the city they spread out towards other neighborhoods of BA from east to west.

Lines C and H cross the other lines from north to south. This means that thanks to the C and H lines, connections can be made to other lines on the network.

Below, you can see the map of the subway network. (Click to enlarge) 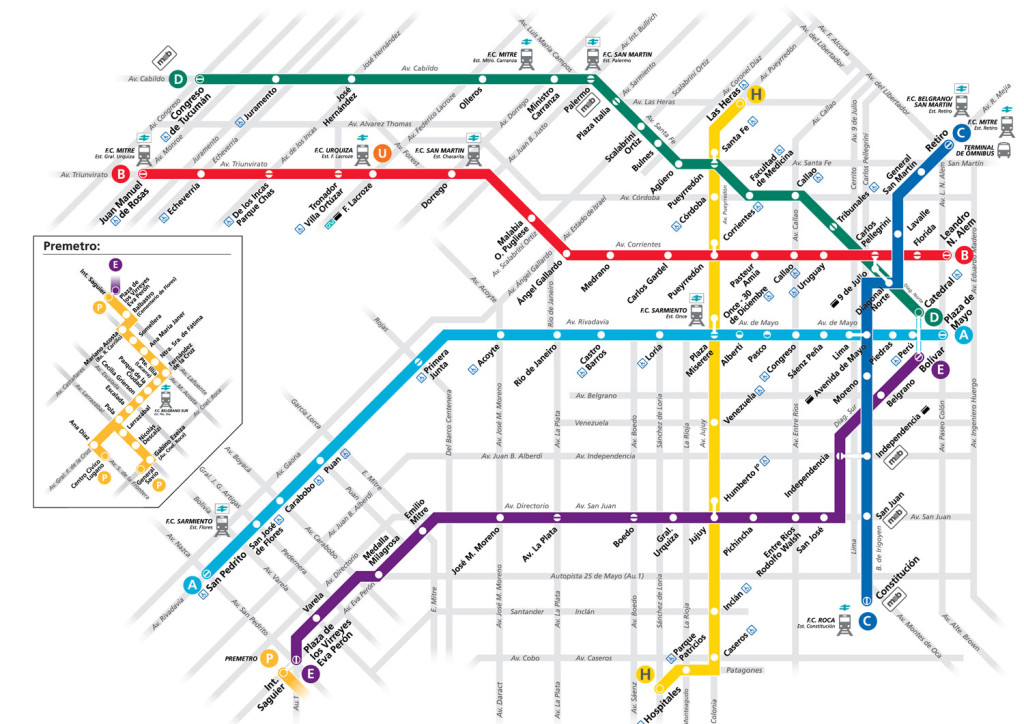 Every subway station has its own name, even if they are stations to make combinations that share location. Here it is necessary to pay special attention when combining subway lines, because the same platform can have different names according to the line where it belongs.

The frequencies and schedules of the subway can vary, so we leave you the website of the Buenos Aires city subway to keep us updated with the information.

In normal situations, the subway works well. Delays may occur at times and during peak hours the wagons are loaded. If possible, avoid taking the subway from Monday to Friday from 7am to 10am to the center and from 6pm to 8pm from the center.

The buses are big and comfortable in BA. Unfortunately, taking a colectivo is much more complicated, because it is necessary to find the correct bus stop and know where to get off. The latter is very important, since they can get off in the wrong place, far from the destination they want to go to.

As a tourist, you may never need to take a bus, since the subway is more convenient, but here are some recommendations just in case:

Once you know your route it is time to wait at the correct stop. You will see the number of the group you need. They usually look like this:

For the bus to stop, it is necessary to call it by raising your hand, otherwise the group will not stop. If there are other people at the stop, you must respect the order of arrival. Respect this order when boarding the bus, otherwise it will enrage the locals. Also note going up through the front door, the back door and the middle door are for getting off only.

Lay the card on the reader.

Once in the bus, you will have to tell the bus driver where you will get off to
see the price in the SUBE reader. Once the amount appears, place the card in the reader and wait for the green light to come on. That’s it, now to enjoy the trip!

Do not get distracted. Pay attention to the street signs with your map to know where to get off. We recommend asking the driver or a passenger if they can tell you when to get off, or failing that, keep the map active with your location to see how much time is left for your next stop. Likewise, the locals are usually friendly and willing to help tourists, so you can count on that extra help.

Taxis are quite safe in Buenos Aires. Do not hesitate to take them, since it is like anywhere in the world. Pay attention to the following: 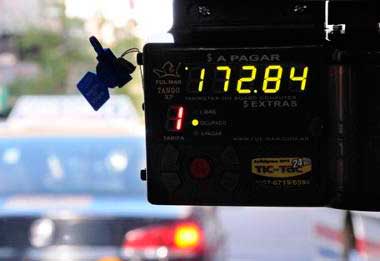 This little machine marks the cost of the trip

We don’t want to freak you out, it is not so common for this to happen, but it is important to always be alert.

It operates illegally in Argentina. It works without permission or license. So, we cannot give you more information about this system.

The only reason you would want to take a train is to go to Tigre. If this is your case, you can see the note “How to get to Tigre from Buenos Aires” and access all the information to know this beautiful municipality of Buenos Aires.