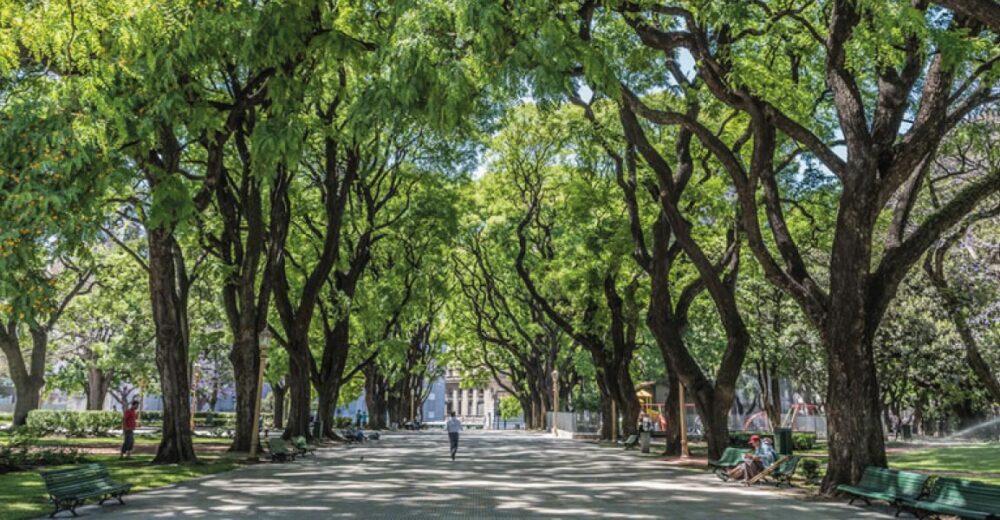 San Martín Plaza, one of the oldest in the city of Buenos Aires, in the heart of Retiro.

It is one of the few green spaces where several historical events took place.

In 1807, a combat was carried out, which ended in victory. In 1812, San Martín installed the barracks of the Horse Grenadier Regiment, so in 1878, before the centenary of his birth, he was commemorated by giving his name to this beautiful and enormous space. In 1942 it was declared a Historic Place of the city.

The renowned landscaper Carlos Thays, was the one who incorporated new plant species. In addition, this space has large monuments and sculptures, which you will easily find. One of the most impressive is the one dedicated to General San Martín and the Armies of Independence.

It also has a play area for the little ones and many benches where you can sit and enjoy its many pine, willow and palm trees, a variety of plants and birds; and plenty of green space to throw down a blanket and improvise a fun picnic.

It is the lung of Retiro to cut with the bustle of the downtown area of ​​the city.

In front of the Plaza San Martín is the Museum of Arms of the Nation and the Military Circle, on Av. Santa Fe. 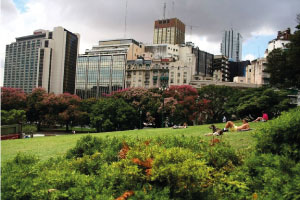 Due it is located in such a central place in the Retiro neighborhood, you will find many bars, breweries, restaurants and kiosks, so any plan to walk to Plaza San Martín is good.

It is a very well located area, to be reached by any means of transport. Subway line C has direct access to the plaza and the Museum of Weapons, so you must get off at the Gral. San Martín station. Also, you will find many bus lines that bring you closer to this beautiful square. And, if you dare to go by bike, you have several streets with a bike path for safer transport, since the area is quite crowded because it is part of the downtown area of ​​the city.

In 2009, the exhibition “Culture for Peace” was held, with 140 sculptures of bears 2m high, each one, painted by an artist from the 140 countries of the United Nations. In 2011, Marta Minujín, a renowned Argentine artist, installed the “Torre de Babel”, a 25m spiral-shaped work consisting of 30,000 books in different languages.

Don’t miss out on enjoying this beautiful space in the middle of the city of Buenos Aires!