North Coast Buenos Aires, all the information so that you can enjoy this totally free space in the City of Buenos Aires!

Planned as a walk in the open air while Alvear was president of Argentina. It is a corridor that runs parallel to the Río de la Plata and connects the Recoleta and Ciudad Universitaria neighborhoods, crossing the Palermo neighborhood. 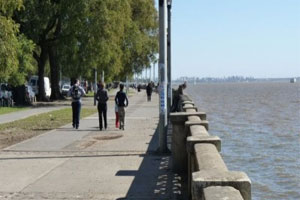 It was developed on land that was fill, which was extracted during the construction of Subway Line B. In 1938, it was decreed that this land was intended to form a public walk and a public park.

Undoubtedly, it is a place with a fusion of styles and spaces that make it one of the most pleasant places in Buenos Aires to walk around, take a relaxing moment contemplating the River or do some entertainment activity. Also, you will see that there are no buildings that cover the landscape, so breathing here and contemplating the Sun is really fascinating! A landscape worth taking a few minutes to fully appreciate it. 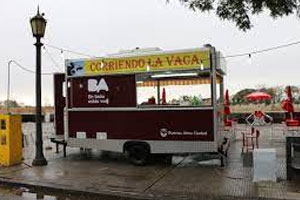 During your tour, you will find several shopping centers, many green spaces and some sports and recreation spaces. Also, you will see many restaurants and street food stalls (food trucks) that are delightful! Do not be guided by aesthetics, you really eat very well in all of them. Here you will find the best choripanes and Bondiola sandwiches in the country!

Approximately in the middle of the road, you will run into the Jorge Newbery Airport, which is located only 2km from the center of Buenos Aires. 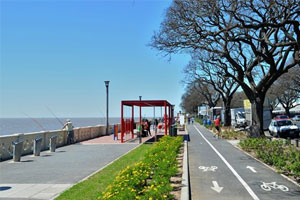 It also has a Park that was inaugurated in 2013, to achieve having in one place the practices of extreme sports such as bicipolo, palestra, skate, longboard among others. Obviously, cyclists are not excluded, as there are bike paths everywhere, as well as benches to sit down and rest a bit.

Do not be surprised if you see many fishermen in the area, since it is very common for people to go fishing there.

Towards the end of the North Coast you will find the Memory Park. It is a space dedicated to the memory of the state victims of the last military dictatorship that existed in Argentina between 1976 and 1983. Here is a note for you to discover more about this place!

Finally, on the border of the city with the province, you can find the Children’s Park, a 32-hectare coastal area where you can enjoy the coast and the outdoors. In summer Buenos Aires Beach usually works, where umbrellas, lounge chairs are placed and there are many activities for those attending. From here there is a bridge that crosses to the Walk of Vicente López, an extensive coastal area of ​​the first municipality of the province.

As you may have noticed, it is like a space completely alien to the bustle of the city. Without hesitation, we recommend that you dedicate a moment of the day to go, especially if it is sunny!

Here we leave you another note so that you know everything you can do in Puerto Madero, which is located a few meters from the Costanera Norte Buenos Aires!