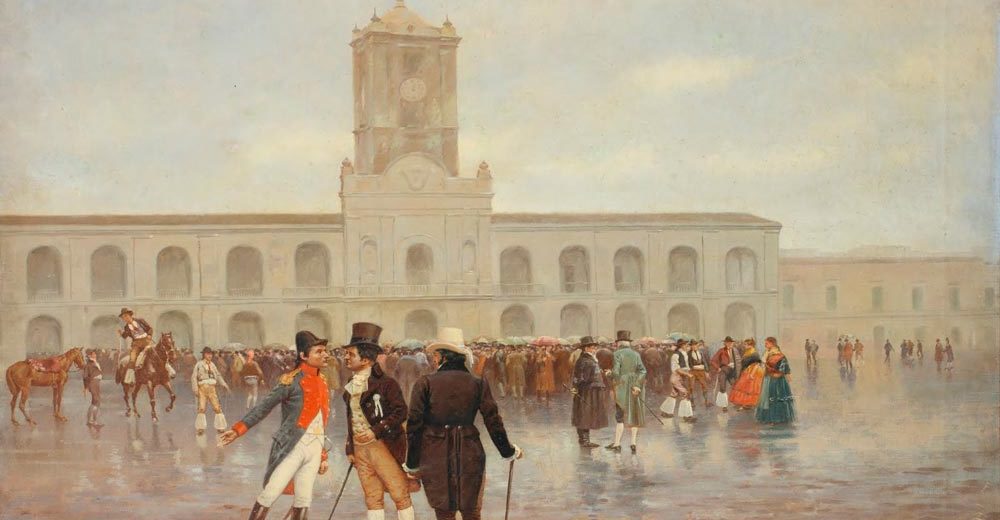 Let’s go back to 1810. At the time, Buenos Aires was the capital of the Viceroyalty of the Río de la Plata, a colony of vast territories which included what we today know as Bolivia, Paraguay, Uruguay and parts of Brazil. This territory was under the responsibility of Viceroy Baltasar Hidalgo de Cisneros. This man appointed by the Supreme Central Junta of Spain, ruled the colony and represented the king. When news came that the King of Spain had abdicated in favor of Napoleon and that the Junta had been dissolved, many patriots argued that Viceroy Cisneros had no legitimacy and had to be removed.

CAUSES OF THE MAY REVOLUTION

1) The Declaration of Independence of the USA

2) The ideals of the French Revolution

The Criollos had resisted against the British army on their own, without any aid from Spain. This certainly gave them confidence.

The Criollos (locals) were not appointed in political offices. This created rivalry between the Criollos and the Spaniards.

Spain had imposed a monopoly over the colonies. They could only trade with Spain, so good had to be smuggled to other countries.

News about the French dominating most of the Spanish Peninsula are confirmed. The Criollos also learn the Junta no longer exists. They challenge the legitimacy of Cisneros

Day of the Cabildo Abierto. Armed Patriots controlled the access to the Plaza so that only the criollos made it to the meeting.

The Cabildo had appointed the recently deposed Viceroy Cisneros as head of the new Junta. The people were angry.

People gather again at the Plaza to demand the dissolution of the Junta and the removal of Cisneros. Finally, he resigned and a new Junta which represented every social group was created.

CONSEQUENCES OF THE MAY REVOLUTION

2) The Primera Junta (or First Assembly) was established.

This was the first independent government of Argentina

Up to then, people accepted the royal authority for the sake of the common good, but now the concept of popular sovereignty prevailed. This idea held that the people had the right to choose their representatives.

5) The Viceroyalty of the Río de la Plata lost its cohesion.

Such a vast territory included different people with different interests and mentalities. Many where not willing to follow Buenos Aire’s rule.