Caminito is located in the popular neighborhood of La Boca, on the Riachuelo River coast and only 400 meters from La Bombonera, the Boca Juniors stadium. It is a pedestrian promenade in the form of a curve of 150 meters where important artistic works can be appreciated. 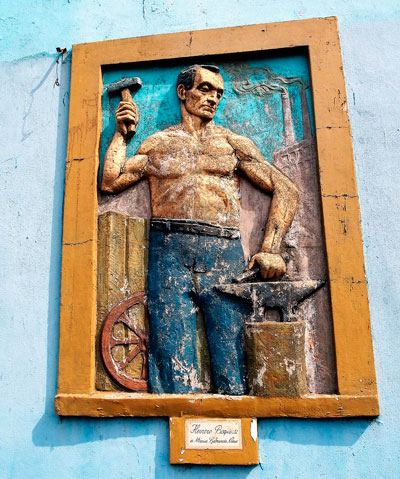 Caminito went through many stages to become the picturesque attraction that it is today.

At the beginning a stream used to flow. For this reason the street has a winding path. Then, it was crossed by the tracks of a railway that fell into disuse years later turning the place into a garbage dump known by the neighbors as “The Curve”.

Finally in 1950, thanks to the initiative of the neighbors, the place was recovered and became a pedestrian walkway and an open-air museum. Benito Quinquela Martín, famous painter and principal benefactor of the neighborhood, painted the wooden and zinc houses in different colors. Artistic works of great importance are also exhibited as “Herrero Boquense”, “Esperando la barca” and “La Familia”, among others. All works were donated by renowned artists in order to beautify and brighten up this walk.

Caminito and the neighborhood La Boca in general used to be a center of residence for Genoese immigrants. All the wooden and zinc houses used to be traditional “conventillos”, precarious popular houses characteristic of the neighborhood since the late 19th century. From there, thanks to the fusion of different cultures, one of the most important musical styles of the country emerged, Tango.

What to do in Caminito

Caminito is a pleasant place to learn the Tango origins and admire the different artistic works that are exhibited. In addition, it is possible to admire hundreds of murals with deep social meanings that stand out in the walls of the neighborhood. In the following post you will find more information about what to do in Caminito La Boca.

To learn more about Caminito we invite you to our La Boca Walking Tour, a walk through the history of this important place in Buenos Aires. Available from Monday to Saturday 11 am without reservation. The tour is based on tips and is one of the most prominent in the neighborhood.